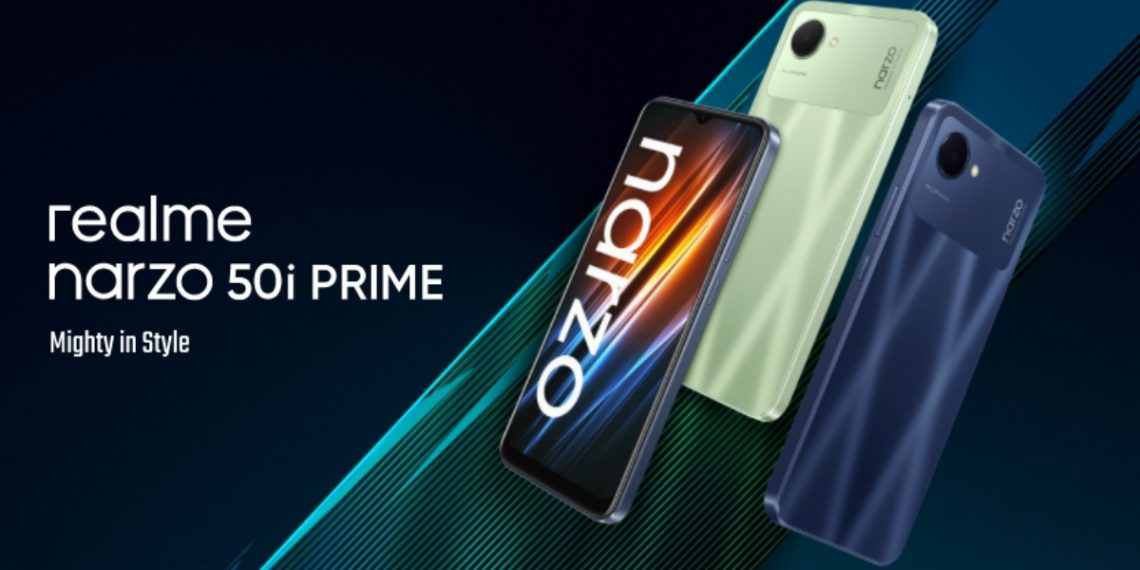 Realme has added the latest Narzo 50i Prime to its Narzo 50 lineup of smartphones in India. The Narzo 50i Prime is a budget smartphone and is already available in the global markets. The handset carries similar internals as the Realme C30, but offers a different design. The smartphone packs in a large 6.5-inch IPS LCD, UNISOC T612 chipset, LPDDR4x RAM, UFS 2.2 storage, 4G LTE, dedicated microSD card slot, and FM radio, among other features.

The Realme Narzo 50i Prime comes at a starting price of ₹7,999 for the 3GB RAM + 32GB storage model. Meanwhile, the 4GB RAM + 64GB storage version is priced at ₹8,999. The handset comes in Dark Blue and Mint Green colour options.

The smartphone will go on sale via Amazon during its Great Indian Festival Sale scheduled for September 23, 2022. You can also purchase it via Realme’s website or offline retail outlets.

Realme is known for experimenting with different finishes and designs with its devices. The Realme Narzo 50i Prime is no different, as it comes with a vertical stripe design with reflective patterns at the rear. The huge camera island is colour blended and incorporates a single camera sensor with LED flash. The handset flaunts its flat sides, which is the current trend in the smartphone industry. What’s not in trend though, is the waterdrop notch on the top of the display, which is okay considering its price tag.

The Realme Narzo 50i Prime boasts a 6.5-inch IPS LCD display with HD+ resolution and 400nits of brightness. The smartphone is powered by a UNISOC T612 processor, which is based on the 12nm fabrication process. The chipset incorporates two powerful ARM Cortex-A75 cores clocked at 1.8GHz and six efficient ARM Cortex-A55 clocked at 1.8GHz. It is equipped with up to 4GB of LPDDR4x RAM and up to 64GB of UFS 2.2 type internal storage.

In terms of imaging, the Narzo 50i Prime comes with a single 8MP sensor with f/2.0 aperture with AF at the rear. You can utilise the rear camera to shoot Full HD 1080p videos at 30 fps. There’s a 5MP f/2.2 aperture snapper at the front for selfies and video calls.

Some other noteworthy features of the device include 4G LTE, Wi-Fi, dual-SIM, Bluetooth v5.0, A-GPS, micro USB 2.0 port, accelerometer, proximity sensor, FM radio, and a 3.5mm headphone jack, among others. The handset packs in a 5,000mAh battery unit accompanied by 10W charging support. The Narzo 50i Prime runs on Realme UI R Edition based on Android 11.