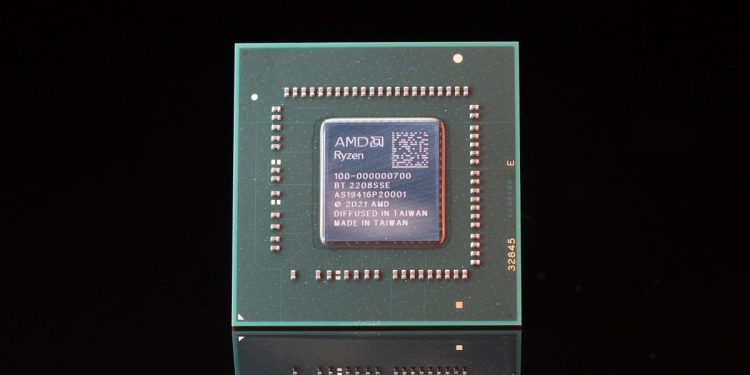 AMD has announced its entry-level Zen 2-based 7020 series of mobile CPUs, codenamed Mendocino. The 7020 CPUs comprise two new Ryzen variants, as well as one Athlon model. They’re designed for budget laptops and are set to launch in Q4 2022.

The AMD 7020 series includes the AMD Ryzen 5 7520U, Ryzen 3 7320U, and Athlon Gold 7220U. They are built using the 6nm manufacturing process. The APUs include up to four Zen 2 CPU cores and are equipped with AMD’s integrated Radeon 610M graphics. All chips have a maximum TDP of 15W. Additionally, the processors support up to 32GB of LPDDR5 memory.

Among the three processors, the Ryzen 5 7520U emerges as the most impressive of the lot. The chip includes four cores and eight threads. It boasts of a 2.8 GHz base frequency across all four cores. Furthermore, it has a 1T boost CPU frequency of up to 4.3 GHz. It has 4MB of L3 and 2MB of L2, with a total of 6MB of cache.

The least powerful CPU in the 7020 series is the Athlon Gold 7220U. It has two cores and four threads. The chip has a base CPU frequency of 2.4 GHz. It has the lowest single core boost frequency among the lot, up to 3.7 GHz. The processor has 4MB L3 and 1MB L2, which comes up to 5MB of cache.

Based on AMD’s internal tests, the company claims that laptops with a 40-45Wh battery and featuring the 7020 series can be powered for up to 12 hours. These tests were conducted with 8GB of RAM on the Intel system and 4GB of RAM on the Ryzen system. AMD claims that the Athlon Gold 7220U chip can support up to 97 FPS in Counter-Strike: Global Offensive, 84 FPS in League of Legends, and 61 FPS in DOTA2 at 720p resolution.

Laptops featuring the AMD 7020 processors will be available from Q4, 2022. Laptops with these processors are expected to be priced between $399 and $699. The Ryzen 7020 Series ecosystem supports partners such as Acer, HP, Lenovo, and Microsoft. So, we can expect laptops sporting the 7020 processors by the end of this year.