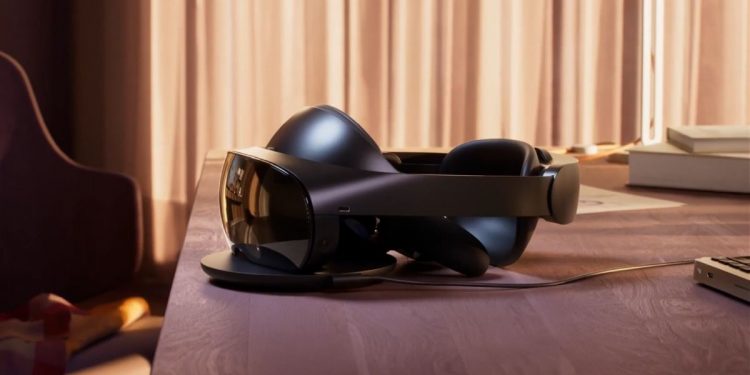 Meta has unveiled the Quest Pro, the company’s high-end Virtual Reality (VR) and Mixed Reality (MR) headsets. Although the “Pro” branding is nowadays casually used to indicate a top-end model, the Quest Pro is marketed towards professionals, justifying the “Pro” tag. The Meta Quest Pro is priced at $1,499 (around ₹1,23,500) and will be available for purchase from October 25, 2022.

The Meta Quest Pro sports a new pancake lens design, which reportedly reduces the depth by 40 percent while improves the sharpness by 50 percent in the peripheral vision and by 25 percent in the center view.

The Quest Pro sports a more open lens design which works for the “mixed reality” aspect of the device. The new design allows users to view their surroundings in their peripheral vision without having to remove the headset.

The Meta Quest Pro features the brand-new Snapdragon XR2+ Gen 1 processor. It is said to offer 50 percent higher sustained performance compared to the XR2 powering the Quest 2. The platform also offers a 30 percent improvement when it comes to thermals. It also includes twice the RAM, at 12GB. Additionally, it comes with enhanced storage capacity of 256GB, which is a significant jump from the Quest 2’s 128GB.

Meta states that the displays have 37 percent more pixels per inch than the Quest 2. The Quest Pro has a resolution of 1800×1920 pixel per eye at 90 Hz refresh rates. They also have 75 percent more contrast due to local dimming technology and 1.3x larger colour gamut than Quest 2.

The device also features new, full-colour passthrough cameras as well as a depth system that can detect the location of objects in your surroundings. This is what will enable mixed reality by superimposing virtual items on top of your real-world environment.

Another interesting aspect of the Quest Pro is the curved cell battery, which the company claims is a the first of its kind. The battery rests at the back of the headset. As for the battery life, it is said to last for just an hour or two on a single charge.

For a device that’s strapped on to your head, an important point to consider is its weight. The Quest Pro weighs 722 grams, making it heavier than the Quest 2 which weighs in at 503 grams. But that comes as no surprise, considering the additional hardware on the Quest Pro.

The Meta Quest Pro controllers are powered by the Snapdragon 662 mobile processor. They come with rechargeable batteries and can track themselves via three built-in cameras. Hence, you won’t require headset cameras or tracking rings like the ones used by Quest controllers. With this new tech, the Quest Pro controller will allow for 360-degrees-of-motion freedom for your hands in the virtual world.

The controller features TruTouch haptics which make the force feedback feel more realistic. It comes with an optional clip-on stylus which allows you to virtually draw more accurately on real-world items.