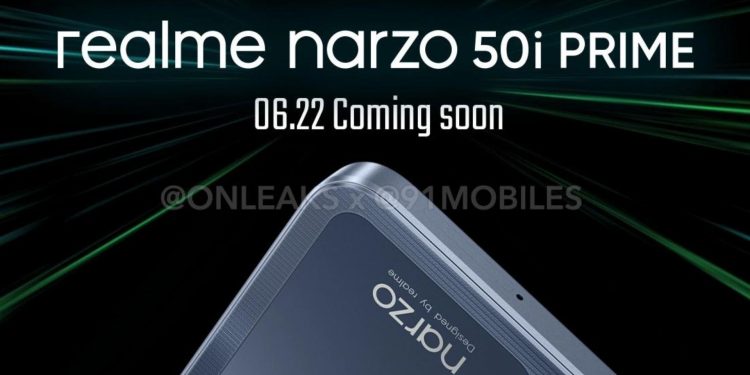 The report claims that the upcoming Narzo 50i Prime will be priced under $100 (approx ₹7,800). This will make it the company’s most affordable device for the year.

The leaked renders showcase the Narzo 50i Prime in two colour options—black and green. The handset will come with a flat edge design which we have already seen on a couple of budget Realme handsets such as the Realme C35 and the Realme C30.

The upcoming Narzo 50i Prime will feature a full-screen display with a waterdrop notch and a thick chin. The volume rockers and the power button will be located along the right edge. Whereas, the back panel of the device will house a single rear camera and an LED flash on the top left corner.

The camera island on the upcoming Narzo 50i Prime appears to be inspired by Poco smartphones. This means that the back panel will accommodate a huge camera module with Narzo branding inside it. Also, the camera module will have a different texture compared to the remaining back panel. The smartphone is said to come equipped with a 5,000mAh battery unit.

What do you think of the design of the Realme Narzo 50i Prime? Do let us know down in the comments section.