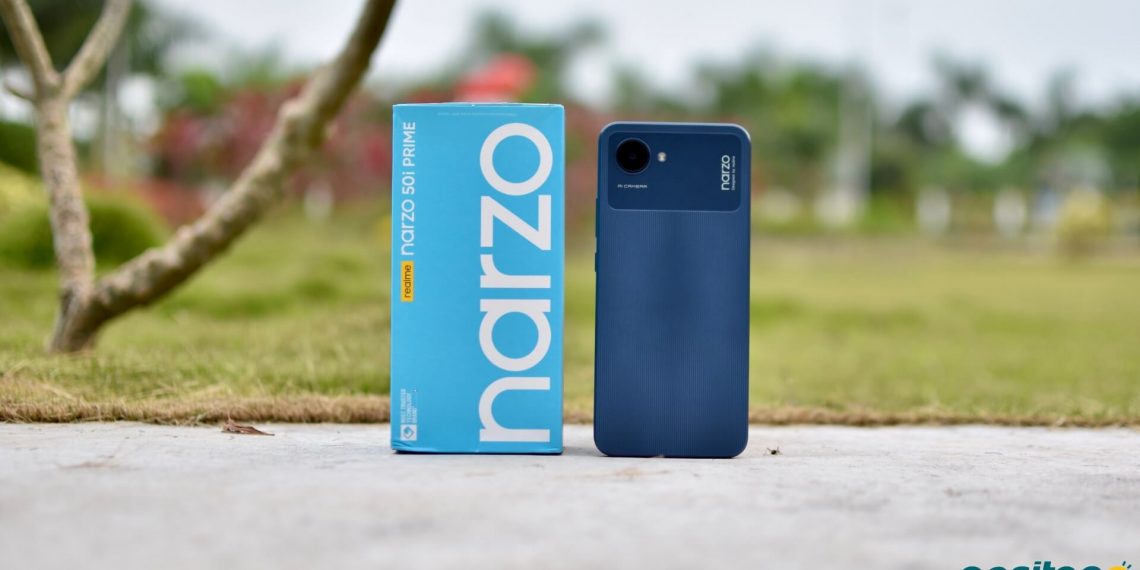 Various smartphone brands are releasing phones with little to no differences between them. And these devices create a lot of confusion among intended buyers. Samsung’s Galaxy A, Galaxy F, and Galaxy M lineup of devices are a good example of this trend, as a lot of those models have extremely common specifications. Realme, too, has adopted a similar strategy for its Realme C and Narzo series.

So how does it perform? Let us check out our Realme Narzo 50i Prime review.

You would struggle to notice the difference between the design of the Realme Narzo 50i Prime and the Realme C30s because they look so similar. The Narzo 50i Prime has a wider camera island and a different pattern on the rear. The rest of the design is the same on both smartphones, featuring a plastic frame, a plastic back, and non-branded glass protection. Despite all that plastic, it is a well-built phone. And it’s good-looking, too.

There is a ridged pattern on the back, and the sides are flat. The power and volume buttons are on the right side of the device and are perfectly accessible. The power button feels a bit mushy, though, and unlike the Realme C33, this phone lacks a fingerprint reader. In 2022, every smartphone priced above ₹6,000 should have a fingerprint reader, but here we are, and there are a lot of phones without it.

It’s a lightweight device for its size, and it is comfortable to hold. It lacks any form of IP rating, which means you should be careful about taking your device near a pool or a beach. It has a 3.5mm headphone jack, but sadly, it features a microUSB port instead of a USB Type-C.

The 6.5-inch IPS LCD on the Realme Narzo 50i Prime is exactly similar to the one on the Realme C33. It means that the phone has a pretty average display. It has HD+ resolution, and you can sometimes see the pixelation, especially in smaller UI elements and text with a small font size. I have no complaints about its brightness and colours. Realme has dialled the contrast up to 11, though, and some details are lost in certain UI elements. I have no major issues with the screen. It’s big, bright, and decently colourful.

The single loudspeaker on the Realme Narzo 50i Prime works well. It puts out volume, but don’t expect miracles from it. It’s okay for watching videos, but it would be best to stick to your earphones for listening to music. Thankfully, the phone has a 3.5mm headphone jack, so you can use your favourite pair of earphones. If you want a good pair of wired earphones, check out the CCA Lyra and the Moondrop Chu that we recently reviewed. If you are looking out for some good wireless earphones, check out the OPPO Enco Buds Buds 2 or the Realme Buds Air 3S that we reviewed and liked.

There’s only one camera on the rear, and I am honestly okay with that. In fact, I love that Realme hasn’t put any useless 2MP cameras on the rear just to show that it has multiple cameras. The phone’s 8MP resolution and sensor size is disappointing, though. Redmi 10A, a similarly-priced phone, has a 13MP camera sensor on the rear.

Let’s take a look at the Realme Narzo 50i Prime’s camera quality. The 8MP rear camera captures decent images in daylight conditions. The colours are pretty and the dynamic range is good. The images are bright, and the details are okay. I was expecting worse images from the camera, and I think Realme’s image processing algorithms are making the most out of the 8MP sensor.

But no amount of software can remedy a smaller, lower-resolution sensor, and it shows as soon as the ambient light starts to drop. I could see a lot of noise in the images captured in low-light conditions. The colours are washed out, and the details are low. The phone also sometimes fails to focus on the subject.

Portrait images from the rear camera are not very good. The image processing algorithm applies a blur effect all over the scene, leaving out just the subject. Since the blur strength is consistent and not gradual, portrait images look artificial.

Night mode improves things a lot. The images are brighter, and the dynamic range is much better. Noise is reduced, too. If you are capturing images in even slightly low-light conditions, make sure to use the Night mode.

The front-facing camera also has a lower resolution—5MP—than I would like. It captures decent selfies, though, and similar to the rear camera, I found selfies captured by the Narzo 50i Prime all right, at least for the price.

The Narzo 50i Prime can record 1080p 30fps videos using the rear camera and 720p 30fps videos using the front-facing camera. There is no video stabilised, so the videos are quite shaky. Details are below-par as well, and that’s in good lighting conditions. It’s best not to record videos in very low light conditions as you would be hard-pressed to see anything. In artificial light, videos are still passable to be used on social media or WhatsApp.

The Narzo 50i Prime runs the full version of Android 11 with Realme UI S on top. It’s not as feature-rich as full-fledged Realme UI and not as basic as Realme UI Go Edition (as seen on Realme C30s). The software looks good but comes with more than a dozen bloatware apps and games.

List Of Bloatware Apps On Realme Narzo 50i Prime

I did not find any jarring bugs or sever issues with the software. Realme UI S offers live wallpapers but a simple app launcher, similar to the stock Android launcher. You can edit the quick setting toggles and its orders, but you can’t change their shape or colour. And instead of Realme apps, you mostly get stock Google apps for calculator, calendar, file manager, and messages. At least you get the multi-user feature.

The phone will likely get two major Android OS updates, but as usual, Realme’s affordable phones get updates almost a year after Google releases a newer version of Android. You get all the basic features of Android 11, including a permissions manager, a notifications manager, screen time, Dark Mode, Night Light, font and display size settings, Do Not Disturb Mode, Dual SIM card manager, storage manager, and accessibility settings.

It’s a fine software, but you can get phones with a more feature-rich software and more customisation settings. Still, I have no qualms with the software as it runs fine without many major slowdowns or bugs.

The performance of the phone is good enough. It isn’t the fastest phone in the segment, but it’s not the slowest either. Yes, you can feel a few slowdowns now and then, but you can use everyday apps without many issues. Thanks to 4GB RAM, I didn’t notice many app reloads while multitasking. Although I was using basic apps like calendar, instant messaging apps, email, and a few online shopping apps.

You can play simple games, too. I was able to play games like the Alto’s Odyssey and Monument Valley. Playing competitive games like Call Of Duty: Mobile with good frame rates will be too much to ask from the Narzo 50i Prime.

I found the phone’s call quality and cellular reception to be good. The other person on the call and I were able to hear each other equally well. Bluetooth and Wi-Fi worked well, too. Although, I would have liked it to feature dual-band Wi-Fi. Since the Narzo 50i Prime has single-band Wi-Fi b/g/n, it couldn’t latch on to my 5GHz Wi-Fi networks.

The Realme Narzo 50i Prime easily last a full day of heavy use in my review. If you have a moderate usage pattern, you can even expect 1.5 days of usage on a single charge. But this is nothing surprising for most affordable phones these days. Some phones last even longer, thanks to their more efficient processors. So, I am neither too happy nor unsatisfied with the Narzo 50i Prime’s battery life.

I am quite disappointed with the phone’s charging speed and charging port, though. The device comes with a 10W charger, and it is very slow. It takes almost 3.5 hours to charge from 0-100%. Plus, the phone has a microUSB port, which is not as easy to use as a USB Type-C port.

The Realme Narzo 50i Prime is an affordable smartphone with a good-looking design, a big and bright display, good software, fast performance, and good battery life. But it also comes with a few shortcomings. First and foremost, the phone should’ve had a USB Type-C port instead of a microUSB port. Plus, it should’ve had faster charging, and better cameras.

If you can spend just ₹500 more, you can get the Xiaomi Redmi 10, which has a higher-resolution rear camera, better video recording from the front camera, a fingerprint reader, a USB Type-C port, and faster charging speeds. But if you have a strict budget of ₹7,999, the Narzo 50i Prime.

The Realme Narzo 50i Prime is an affordable smartphone with a good-looking design, a big and bright display, good software, fast performance, and good battery life. But it also comes with a few shortcomings. It should’ve had a USB Type-C port and faster charging